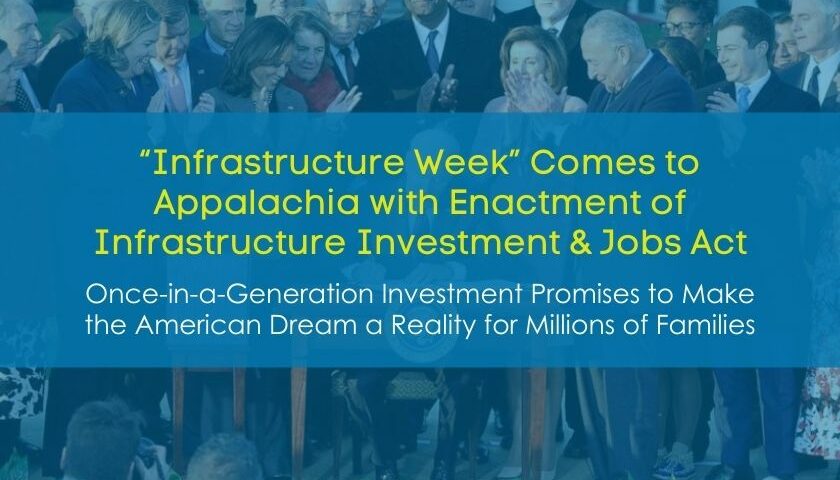 On November 15th, 2021, after months of negotiations among House and Senate leaders, the long-awaited “Infrastructure Week” finally came to Washington as the President signed his historic $1.2 trillion bipartisan Infrastructure Investment and Jobs Act into law. Fahe had been advocating to lawmakers all year to ensure the inclusion of Fahe Member Priorities into the final language of the bill, and its many provisions for investment in long-overdue capital projects do not disappoint.  The law dedicates roughly $65 billion for broadband deployment and affordability, a $1 billion investment for the Appalachian Regional Commission, and $500 million for home weatherization improvements as part of the Low Income Home Energy Assistance Program (LIHEAP), among many other priorities.

While the new law designates much-needed federal funding for infrastructure projects ranging from road construction and bridge repairs to replacing unsafe lead pipes and improving structural resiliency to natural disasters, perhaps its most transformative potential for our region lies in its broadband and high-speed data service provisions. Fahe was part of a large coalition that believed the time for broadband investment had come.  According to estimates from the Appalachian Regional Commission, roughly one in four households in Appalachia lack high-speed internet access, including 37% without reliable hardline networks. This digital divide not only hampers connectivity to friends, family, medical providers, and even sources of information and education, but it also functionally excludes millions of workers from participating in the virtual economy, particularly as a result of the pandemic’s displacing effects on the workforce.

In light of this sizable digital gap, Fahe’s Board of Directors adopted a broadband policy after it was developed last year by the Big Picture Policy Committee. Beyond the topline dollar figures, the law’s broadband investments contain several provisions that reflect many of the priorities outlined in Fahe’s policy.  Specifically, the “Broadband Equity, Access, and Deployment Program,” as it is termed, will be created with $42.45 billion in federal grants to prioritize broadband projects in underserved areas, including rural localities and persistent poverty communities where large portions of the local population have lived in below-poverty conditions for the last three decades or longer.  In keeping with the speed and quality standards articulated by the Fahe Board, it also defines adequate broadband as 100 mbps download speed and 20 mbps upload speed, setting an important network performance benchmark to ensure reliable connectivity.  Moreover, consistent with Fahe’s original position on strengthening broadband cost assistance for low-income residents, it permanently codifies the Emergency Broadband Benefit, which allows qualifying families to receive monthly funding to apply towards their internet service costs.  Combined, these investments in broadband network deployment and affordability promise to digitally enfranchise millions of households across the country, especially for historically overlooked communities in our region.

Even outside of these extraordinary commitments to end digital redlining, the new law also channels restorative investments in home upgrades and energy efficiency improvements.  As many Americans begin to see energy costs inching higher, retrofitting private homes to better insulate their interior climates and help residents safely withstand temperature extremes is becoming an increasingly important public policy imperative.  Accordingly, Fahe’s Big Picture Policy Committee adopted a policy position aimed at revitalizing substandard housing and creating new jobs in the construction and home weatherization industries, which itself saw measurable progress in the enactment of this legislation.  With roughly a half-billion dollars earmarked for LIHEAP, not only will households across Appalachia finally get the structural upgrades they’ve long needed, but those same families will also save hundreds or even thousands of dollars annually on heating and cooling bills.

These remarkable legislative accomplishments in the bill testify to the Fahe Network’s ability to bring the interests of Appalachian communities to the doorstep of policymakers and help shape the way our nation addresses long-deferred infrastructure deficits. In fact, several Fahe Members worked together and led high-stakes meetings with legislators to help get these proposals over the finish line. Now, as the law goes into effect, the Fahe Network stands ready to ensure the efficient and impactful deployment of these new resources in the communities they are intended to serve.

Fahe thanks the bipartisan coalition of legislators representing communities within the Fahe Network who voted for passage of this bill.  After nearly a year of conversations and correspondence, these officials supported Fahe Member priorities and helped bring to life a legislative plan that promises to make the American Dream a reality for their constituents for years to come.  Senators McConnell, Cardin, Van Hollen, Kaine, Warner, Capito, and Manchin all voted in favor in August.  In the final legislative hurdle in November, Representatives Sewell, Trone, and McKinley made passage in the House possible. In particular, Representative McKinley (R-WV) deserves special recognition as one of the thirteen House Republicans who crossed the aisle to support the largest investment into rural broadband deployment in American history.

Joshua Stewart works as Advocacy Manager at Fahe to help the Membership have their voices heard in Washington, D.C., as we all act together to build prosperity throughout Appalachia. He also works closely with our Caucuses to amplify their effectiveness in state houses and governors’ mansions across our region. He lives in Maryland, and enjoys brewing his own (award winning!) beer. 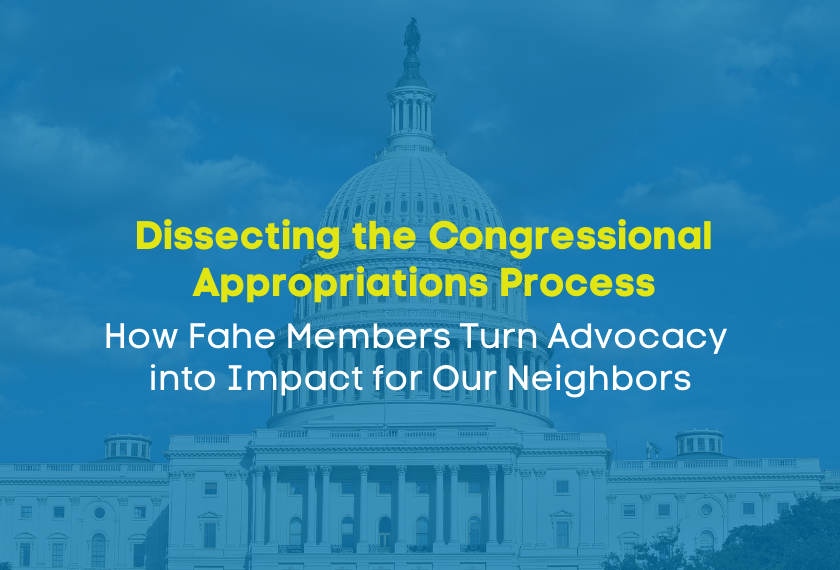