Celebrating 25 Years of CDFI Investments that Work in Appalachia

Fahe has been awarded $20 Million through the CDFI Bond Guarantee Program. 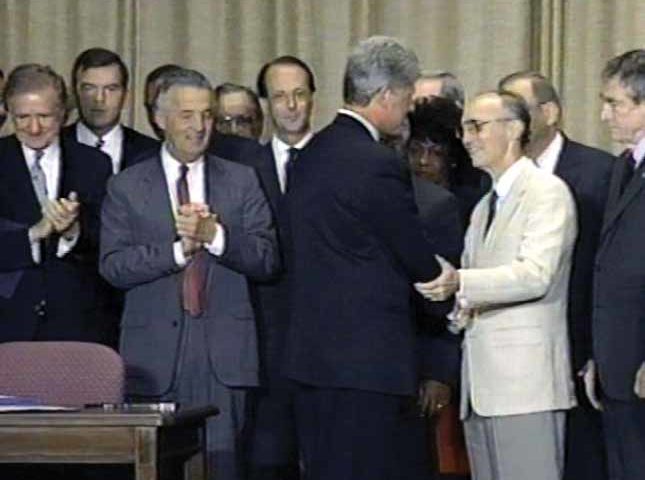 Former Fahe President, Dave Lollis, shakes the hand of President Bill Clinton after introducing him at the signing of the legislation establishing the CDFI Fund.

Today at the Opportunity Finance Network Conference in DC President Bill Clinton presented a key note speech about the impact and importance of CDFIs in uplifting our country. President Clinton was instrumental in the creation of the CDFI Fund in 1994. Working with the CDFI Coalition, the Clinton Administration designed the final legislation and on September 23, 1994, The Riegle Community Development Banking and Financial Institutions Act of 1994 signed into law by President Clinton.

The central purpose of the CDFI Act was to create a CDFI Fund to promote economic revitalization and community development by investing in and assisting CDFIs through equity investments, capital grants, loans and technical assistance support. For 25 years, The Community Development Financial Institutions (CDFI) Fund has expanded economic opportunity for disinvested people and communities by supporting the growth and capacity of a national network of community development lenders, investors, and financial service providers.  Fahe has proudly served as one of these CDFIs from the very beginning.  Fahe’s former President Dave Lollis was a keynote speaker when President Bill Clinton signed the legislation which established the fund.

Over the past 25 years, the CDFI Fund has awarded Fahe financial awards totaling $11.3 Million. This investment supported Fahe’s ability to lend $900 Million and serve nearly 750,000 people. Fahe has been able to utilize CDFI funds to leverage additional funds resulting in an impact of $1,200 per person from a $15 per person investment. The CDFI Fund is an investment that works in Appalachia and other persistent poverty areas of the country.

Fahe and other CDFIs serving persistent poverty areas are place-based practitioners who understand the markets we serve. We know how to bring together deals in hard to serve places where the markets don’t work like they do in other areas of the country with higher investment.  We know how to collaborate in hard to serve areas such as Appalachia as well as how to collaborate across different regions of the United States with varying backgrounds and cultures as we do with the Partners for Rural Transformation. “The CDFI Movement is powerful reminder that networks of cooperation with disparate elements get better results than homogenous groups,” said President Clinton.  “Complex problems with a lot of moving parts are best addressed by people who are inclined to work together but have different levels of knowledge and experience.” The CDFI Fund is a great investment tool that organizations can utilize to great effect to empower communities and local leaders to create real economic change and opportunity.