In observance of Veteran’s Day, this week we wished to share stories of Fahe’s Members serving those who have served our country.

The following story comes from Fahe Member Kentucky River Foothills Development Council, Inc. (KRFDC) located in Richmond, KY.  KRFDC is committed to the promise of helping people and changing lives.  They do this through various services and programs which provide and support affordable housing, education, and drug and addiction recovery services to name a few. 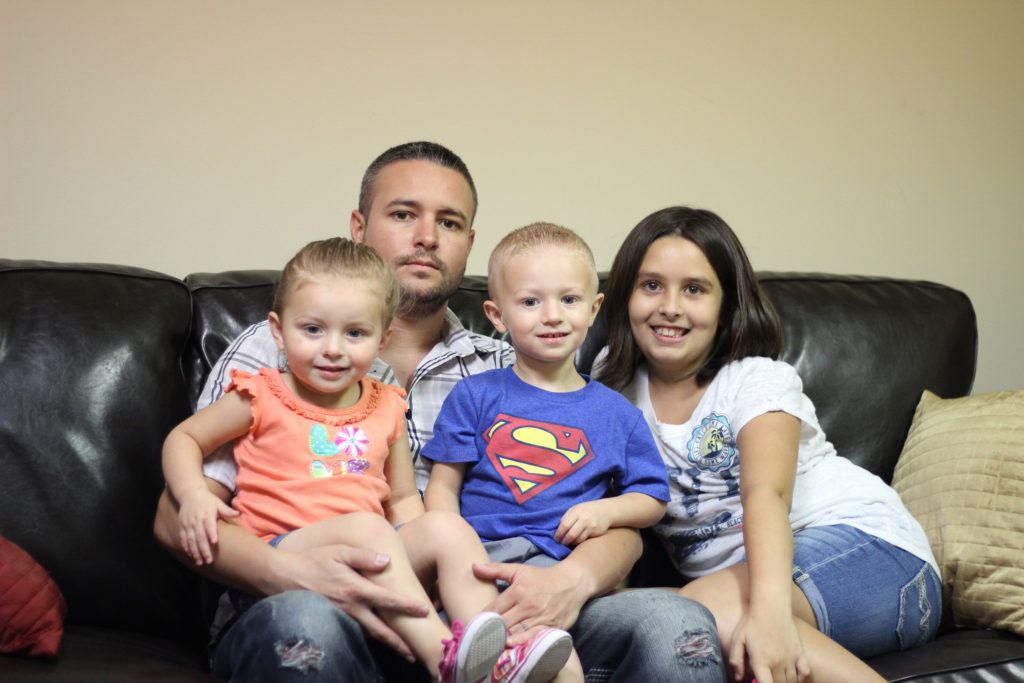 John served our country for ten years after joining the National Guard in 2007 so that he could give his daughter a better life.  In 2010 he began active duty in the Army.   John married and had two more children during the time he was in the military.  In January 2016 he completed his obligation and left the military with a general discharge.  Upon leaving and transitioning back into civilian life, he moved into his in-laws’ house with his wife and three children.

Personal problems ensued between John and his wife and they separated.  John found himself broke, alone, and homeless when he was asked to leave the house.  His world took a devastating turn overnight.  He lived in his car for over a month.  “Never in my wildest dreams did I think I would be homeless,” said John.  “I had always worked and taken care of myself.  That was honestly the lowest point in my life.”

During that time John was also dealing with depression, anxiety, and headaches.  He has numerous aches and injuries to his body that are connected to his service and suffers from post traumatic stress disorder (PTSD).  John was determined to turn his situation around.  While at the unemployment office he learned about Foothills’ Supportive Services for Veteran Families (SSVF) program.  Funded by the U.S. Department of Veteran Affairs, the SSVF project financially assists veterans who are facing eviction to remain housed or who are homeless to obtain housing through a variety of financial and supportive services such as rent payment, security deposit, utility deposits and other forms of assistance based upon the veteran’s need.  John came to the agency for an informational meeting and before he knew it, case managers provided a rapid response to get him housing.  John moved into an apartment and he quickly found employment – two things he desperately needed to provide for his children.  John worked hard and was awarded custody of his children.  “Being a single father is hard,” said John.  “Most days I don’t really know what I’m doing, but together we’re figuring it out.”  The program helped John obtain beds and clothing for himself and his children.  “They went above and beyond what I ever imagined,” he said.

In January 2017 John began receiving his monthly VA disability benefit.  John is going to college to pursue an Associate’s Degree and work as a surgical technologist.  His goal is to obtain his Bachelor’s degree in the future.  By furthering his education, he’ll be able to provide a stable home for his children.  He wants them to be safe, get a good education, and have some of the things he didn’t.  John hopes to never go through such hard times again.  “If it wasn’t for this program I would probably still be living in my car or at a friend’s house,” said John.  “I can’t thank you enough for everything you did for me and my family.”

SSVF services are available to eligible residents or those relocating to Bath, Breathitt, Clark, Clay, Estill, Jackson, Laurel, Lee, Madison, Menifee, Montgomery, Morgan, Owsley, Perry, Powell, Pulaski, Rockcastle, Rowan, and Wolfe. Project eligibility: 1) Active Duty service with a discharge other than “Dishonorable”, 2a) Facing eviction with an eviction notification from current landlord or 2b) have no current permanent housing and living in a shelter, street, car, park, etc., 3) Household income must not exceed 50% of area median income.