The CHEF Finance Intern: Seeing the Financial Side of a CDFI

Some people are born to serve, and CHEF Intern Megan Devoto is definitely one of those people. From speaking with her, I could see her dedication to giving back to communities she lives in and an excitement to do so that has been unparalleled in any of my previous service-related encounters. As a matter of fact, she chose the CHEF internship due to her interests in serving the United States’ homeless population. 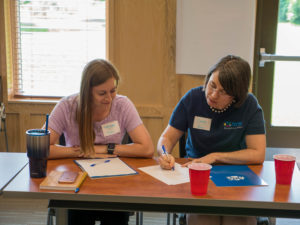 From the first time working with the homeless as a high school student in Cincinnati, Megan was deeply affected by this issue. She said, “My home is so important to me, because it is constant and has so many memories attached to it. When I realized that someone else couldn’t have that, it truly stuck with me.” She continued, explaining that she repeatedly has been drawn to working with organizations dealing with homelessness and housing, and the idea was cemented for her whenever she participated in course work that gave her the opportunity to work with the Lexington Fayette Urban County Government Office of Homeless Prevention and Intervention. Now, she says that her duties as the Advocacy Intern will give her the tools that she needs to work towards lasting social change. “I’ve been gathering and synthesizing all of this information, “she told me, “and I have learned so much about political figures and contacting them.”

She said that her desire to help others came from an early age. “My mom is a nurse at a children’s hospital, “she said. “She was always giving back to the community, and she made it clear to me that doing so was important.” She continued to live by that attitude into high school, where she was a member of a service club.  As a member of this service club, she was given the opportunity to go around to different sites and provide assistance to them, giving back to different types of communities. “The first time I came to Kentucky, I was actually on a service trip to Harlan County, “she explained. This experience gave her a heightened awareness of the persistent poverty of surrounding areas and brought her closer to her passion. Her efforts were rewarded when she received the Pinnacle Award from Berea College, an award offered by the college to high school seniors who have made outstanding contributions. Her service background led her from receiving this award to leaving Cincinnati to attend Berea College for her undergraduate degree.

This was a large transition for Megan. She excitedly explained to me how she thought that the mountains in Kentucky were “ginormous” when she first came. It was apparently very different from the suburbs where she grew up, even though she didn’t consider Berea to be “Appalachian”. “I didn’t think that Berea was particularly Appalachian, “she said, “but that’s probably because I’d spent that time in Harlan County, which is more rural. I definitely considered that to be Appalachian. I didn’t quite know what that meant as a region, though, until I got to college and saw the Appalachian Center and a map that highlighted the Appalachian region.”

From Berea College, she earned her degree in Child and Family Studies. She knew she had a desire to engage in social work, and she felt as if this degree encompassed what she needed to know about working with families and communities. She rounded her education with courses in Peace and Social Justice as well, giving her knowledge about social change and advocacy. Currently, Megan is pursuing her Masters of Social Work degree from the University of Kentucky with the goal of working in community development.

When asked where her service journey will take her after this internship and graduate school is over, she replied, “I always assumed that I’d never leave Cincinnati, because my family and everything is there. Honestly, though, Lexington is a good balance for me. It isn’t as large as Cincinnati, but it isn’t as small as Berea, and it is only an hour and a half away from Cincinnati. I could see myself staying there.”