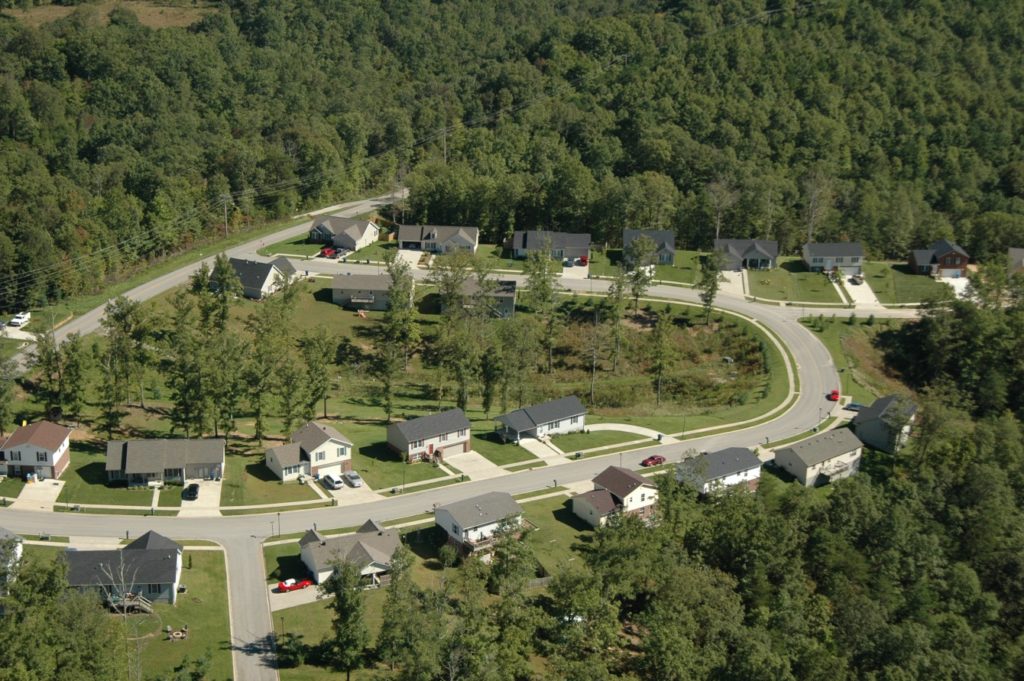 As a backbone organization, Fahe collaborates with our Network of 50+ Members and partners across Appalachia, a region that has the greatest concentration of persistent poverty counties in the nation.  Fahe supports local leaders in these rural areas as they tackle real problems and create change in their communities.

Persistent poverty areas across America share common challenges that contribute to their economic marginalization. For instance, communities in persistent poverty areas are often rural, geographically isolated, and lack economic opportunities. The absence of functional markets and banking institutions contribute to a long-established and persistent legacy of disinvestment.  For Central Appalachia, the disinvestment was present even when the coal industry was at its height as a major employer throughout the first half of the 20th century.  Coal companies redistributed the profits and natural resources outside the region and reclaimed workers’ wealth through monopolies on everything from housing to provisions and healthcare.

Filling up the car with gas is a major economic event for many families in Central Appalachia.  The economic marginalization in the markets Fahe serves means that after paying for housing, utilities and food there is virtually no discretionary income for families to pay for activities that would bring low wealth people into social contact with the middle class—dining out, movies, sporting, or recreational events are not part of the limited budgets

The Fahe Network is designed to connect nonprofits and communities to overcome the geographic isolation and lack of infrastructure in Appalachia.  For almost 40 years, Fahe has been working to develop and implement platforms and systems which allow our 50+ Members to collaborate, communicate, and have access to financing, expertise, advocacy, and training.  We understand that each community boasts active local leaders (often Fahe Members) who are striving to create and capture opportunities.  These leaders KNOW the communities where they work; Fahe plays the critical role of building capacity, driving access to financial resources, and enabling program innovation at scale.

Take for example Beattyville, a small rural town located in Lee County, Kentucky. The growth of this small town over the past 20 years illustrates Fahe’s role in creating critical housing, infrastructure, and jobs which lay the foundation for lasting change in Appalachian communities.

The Transition of Beattyville

In the1990’s, Beattyville had a population of 1,100 people, and Lee County’s population total was approximately 3,000.  There had been no new construction or housing starts for over 10 years.  The unemployment rate was double the state average while the educational attainment rate was half. Beattyville Mayor, Charlie Beach, decided to make a major push to revitalize his town. He started with a traditional model of attempting to bring in industry but he quickly learned that the town lacked the infrastructure needed to support big industry.  There were virtually no standard housing units available for purchase or rent in Beattyville, and the tax base was not sufficient to support basic services like fire protection and trash removal.  Mayor Beach reached out to Fahe and together, we determined that the development of a mixed income subdivision, to be later named Crystal Creek, would be the logical first step for economic transition.

Because the market for housing is broken in Appalachia, there were no developers—for profit or nonprofit—in Lee County. Therefore, Fahe and Mayor Beach had to establish and find funding to support a dedicated agency to fill this need. Beattyville Housing & Development Corp (BHDC) was created to fulfill the role of helping residents connect with opportunities and achieve long-term success as homeowners or renters.  With a fee-based, sustainable business model and outstanding leadership, Fahe Member BHDC became and continues to be an established partner for success, catalyst for change, and leader in the community and the surrounding counties in the region.

With BHDC in place to facilitate the flow of impactful funding, efforts to improve the community began to move forward. In addition to USDA funding, the City of Beattyville accessed resources from HUD’s Community Development Block Grant (CDBG) for development of infrastructure including water, sewer, roads, sidewalks, and to provide development subsidy to the homes.  BHCD accessed the Nonprofit Housing Production and Repair Program funding through Fahe, which was part grant, part 1% loan which helped expand their capacity.  BHDC also worked with Fahe to apply for Appalachian Regional Commission funding to help finance homes.  They also applied for HOME Investment Partners program funding to finance construction to permanent loans.

Bringing Together Partners and Solutions

As a local leader, Mayor Beach’s involvement was instrumental in the development of Crystal Creek subdivision. Since no new homes had been built in the area for over 10 years, there was a lack of suitable houses for the comparable appraisal approach to be a viable option.  Building on Fahe’s relationships with the national agency, Mayor Beach went to D.C. to discuss the situation with USDA-Rural Development.  They took his testimonial into consideration and allowed his recommended cost approach to appraisals to be utilized.  Thanks to Mayor Beach’s dedication to his town, Fahe’s expertise, and USDA’s willingness to craft solutions to Beattyville’s appraisal challenges, the community was able to move forward on the first new construction in the area for over 10 years.

With appraisals secured, BHDC learned to package USDA 502 Direct Loans at 1% rates.  By becoming a packager, BHDC ensured rural families access to affordable mortgage products that are often nonexistent in remote underbanked rural communities.  Without the availability of USDA 502 Direct mortgages, the subdivision’s development and consequent infrastructure improvements would have been delayed or unrealized.

The creation of Crystal Creek Subdivision provided 50+ families with affordable housing and an increase of approximately $4.5 million to the city’s tax base.  The availability of quality, affordable housing has attracted the expansion of businesses to the area, resulting in 150 new jobs.

The increase in public private partnerships in Beattyville also resulted in other essential community development:

Creating an Economy to Live With

As of 2016, Lee County’s population has more than doubled to 6,752 people.  However, despite economic development provided through BHDC, the community still faces many hardships.  In 2016, the percent of rental homes above the affordability threshold was 68.1% compared with a statewide rate of 47.2% and mortgages were 42.5% compared to the state rate of 24.8%.  Though the median home price has risen by 6.3% since 2002, the median home value of $63.8K is significantly lower than the median home value of a similarly sized county in Kentucky, which was $96.3K.

However, change and progress remain evident in Lee County.  Beattyville Housing Development Corporation still continues to provide affordable housing, home rehab, rental, and commodities.  BHDC also helps combat homelessness in the area by working with the Homeless and Housing Coalition of Kentucky to obtain vouchers for homeless and disabled individuals as well as working with KRCC to obtain mental health and recovery services for at-need individuals.  Without Fahe and BHDC, such services would not be making a difference in the lives of Kentuckians.

While Beattyville’s economy is still far from ideal, the community’s improvement resulting from the creation of BHDC demonstrates that when resources and funding are made available for local leaders, change and growth follows even in the hardest to serve areas of Appalachia.