Building Stronger Communities: the first in a series on an internship program aimed at creating future leaders in Central Appalachia.

Point Pleasant, West Virginia, is known as the place “Where History and Rivers Meet.” This is because the town boasts historical attractions that are unique to the area.

For example, Krodel Park is a celebration of the American Dream and the American Revolution. There is also the memorial of the Battle of Point Pleasant, located at the junction of the Ohio and Kanawha Rivers in Tu-Endie-Wei State Park. Then there is the Point Pleasant River Museum and Learning Center, which is home to an aquarium, research library, and pilot house simulator.

However, if anyone knows about any bit of history from Point Pleasant, it is all about the Mothman. Whether people have seen The Mothman Prophecies or read the acclaimed book, the Mothman story is a familiar one. For those who are not familiar, the Mothman is a cryptozoological myth, much like Sasquatch, but his history is vague in the way that he just disappeared after the worst disaster in the town’s history, begging the question of whether he was a friend or foe to those who saw him.

I grew up a few hours away from Point Pleasant, and I was very much familiar with the tale. I remember seeing a film about unique myths on TV and being told by my grandparents that the Mothman was an old wive’s tale. I, however, was not convinced.  Here’s what I learned from years of (probably) too much interest in the subject.

The Mothman sightings reportedly began on November 15, 1966, when two married couples from Point Pleasant were travelling late at night. They were passing an abandoned WWII TNT Factory about seven miles from town, when they saw the glowing red eyes of the beast. Reportedly, the animal was “shaped like a man, but bigger, maybe six and a half or seven feet tall with big wings folded against its back.” The reporters claimed the animal chased them at speeds of over 100 miles per hour. 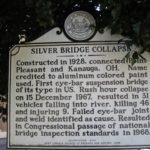 There were many more sightings after this one, continuing until the Silver Bridge Collapse in December of 1967 (read about it here). The Silver Bridge connected Point Pleasant, West Virginia, and Gallipolis, Ohio, and was built in 1928. It was a heavy traffic bridge due to the convenience of its location, meaning that it wasn’t hard to believe that 46 people had died. The bridge fell due to a failed suspension that was reportedly caused by a manufacturing flaw. After this disaster, Mothman was seen significantly less until sightings eventually tapered off. The mystery remains as to whether Mothman caused this disaster or if he attempted to warn the locals about it.

If you’re like me, and you’re also very interested in this hometown myth, there are plenty of everyday resources for you to learn more about Mothman as well as the area. The city of Point Pleasant has a Mothman Museum, where people can see exclusive documents and displays, such as the original police reports from original sightings. Outside of it stands a realistic statuesque depiction of the Mothman where visitors can have their photo taken with the beast’s (artistically rendered) likeness. You can also ask just about anyone. Fifty years later, locals still pass on the stories. 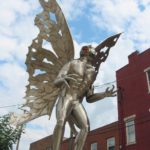 Folks even come together once a year for the Mothman Festival, which is a commemoration of the visit of the mysterious entity. If you’re interested in going, it takes place every year on the third weekend in September, which happens to fall on September 16th and 17th this year. You wouldn’t be alone since the festival attracts thousands of people to Point Pleasant. The festival includes a 5K, tours, live bands, cosplay, kids activities, and more all so that people can learn the history of Point Pleasant. If you’re a serious Mothman investigator, there is also guided tours that include areas where Mothman was seen the most, such as the TNT. While exploring and having fun, it’s good to think about your own feelings about the Mothman. I recommend making a stop at the historical sites around town and deciding for yourself whether you think Mothman was a friend, foe, or overly exaggerated myth.